(Posted June 11, 2018)  Research has indicated that viewing a food as a snack or a meal can impact not only decisions about when, where and why food is consumed, but also what food is consumed. A study in Food Quality and Preference has investigated gender differences in which foods are perceived as snacks vs. meals. Gender differences may reflect preconceived notions about snacking on health, with women being more cautious about eating unhealthy foods, and avoiding sugary or fatty snacks. — For more information…

(Posted Jan. 2018) The Centers for Disease Control and Prevention’s (CDC) “National Diabetes Statistics Report, 2017” says that 30.3 million people or 9.4 percent of the U.S. population had diabetes in 2015. Out of these, 23.1 million of those or 7.2 percent were diagnosed with diabetes, while 7.2 million or 23.8 percent were either undiagnosed or did not report having diabetes. — For more information click here…. 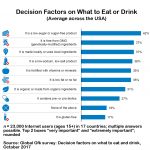 (Original post Oct. 2017) A global online survey conducted October 2017 by Gfk, the German consumer research firm, revealed that, globally, consumers’ top two deciding criteria in choosing a food or beverage is whether the product is low-sugar/sugar-free, or free of genetically modified ingredients (non-GMO). The survey included 23,000 participants from 17 countries including Canada, USA and Mexico.  — For more information….

Maltodextrins: To be Sugar Added or Not to Be?

In the preamble to the Nutrition Facts label final rule (81 FR 33742 at 33835), whether starch derivatives, such as maltodextrin, would amount to empty calories, could determine whether maltodextrin would be included as added sugar on the label. Ingredients, such as maltodextrin, are hydrolyzed to achieve various degrees of dextrose equivalence (DE). The higher the DE, the lower the degree of polymerization, the higher the sweetness level. Maltodextrins have a DE less than 20, varying levels of DEs with different percentages of mono- and di-saccharides, a low level of sweetness and are more often used as fillers or flavor carriers.

Still, maltodextrins are used in many products, and if maltodextrins are intentionally created through hydrolysis at a level of more than 0.5 grams per serving, they must be declared on the label as added sugar, as their contribution to the diet would be considered as empty calories. However, when maltodextrins are used at a level less than 0.5 grams per serving, they would be considered insignificant and would not have to be labeled as added sugar.
When considering added sugars on the label; however, other products made from the hydrolysis of starch must be included as well in calculating the 0.5 grams threshold, such as corn syrup solids. It’s ultimately the level of mono- and disaccharides with one and two degrees of polymerization (DP1 and DP2) that result from the hydrolysis of starch to produce products such as maltodextrin, which exceed 0.5 grams or not, that determine whether added sugar will be on the label…or not. — From a 2017 Draft Guidance by FDA on Nutrition and Supplement Facts Labels

A study of consumer spending, changes in prices and overall sales of sugar-sweetened beverages (SSBs)was conducted in Berkley, CA for one year, after a tax was levied on such beverages. Berkley’s one cent-per-ounce tax on sugar-sweetened beverages in November 2014 gave the researchers an opportunity to study the potential effect on buyer behavior – particularly in an affluent community.
The results showed that in the 15.5 million supermarket checkouts studied, 67% of the tax was passed on to consumers across all SSBs, while 100% of the tax was passed through for sodas and energy drinks in grocery stores, gas stations and partially in pharmacies, but not in independently-owned gas stations and stores. In addition, sales of taxed-SSBs per ounce fell by 9.6% versus predicted sales of untaxed-SSBs; however, sales of untaxed-beverages in general rose 3.5%. Consumer spending per average grocery transaction did not increase, nor did Berkley store revenue fall.
SSB sales in comparison cities (without the tax) rose by 6.9%. Berkley residents were low consumers of SSBs to begin with – consuming only 34% of the national average. Thus, although findings suggest the excise tax on SSBs could lead consumers toward healthier buying habits, more evaluation needs to be conducted in areas with more typical SSB consumption if the ultimate goal is to assess the effect of the SSBs tax on dietary health benefits.   — PLOS Medicine, Published online April 18, 2017

The Pot Sweetens for Sugar Reduction – Ways to Enhance

Food journalist and writer, Caroline Macdonald’s bite-sized insights into ingredient technology focuses on sugar-replacement technology in her web site’s section on reduction and reformulation. Sugar is the primary health concern according to research conducted by Mintel. Consumers are looking for natural sweetener alternatives, such as stevia, monk fruit, polyols, honey and agave.
Also driving innovation is the knowledge that added sugars were to be highlighted on nutrition labels beginning in July of 2018. [Note: The U.S. Administration has put implementation is on hold.] This labeling change has food scientists and ingredient manufacturers alike searching not only for sugar substitutes, but other ways in which consumers might perceive sweetness without having to put sugar or other caloric sweeteners on the label. For instance, sweetness may be perceived by adding vanilla or strawberry esters. Enzymes are also being used to boost sweetness, particularly in dairy products. Even food coloring and the shape of the product reportedly contribute to consumers’ perception of a product’s sweetness. Look for sugar replacement technology to dominate food innovation in the next several years to come. Posted 7/24/2017   — Bites blog, UBM EMEA

The purpose of a December 2016 paper in the Annals of Internal Medicine was to systematically review guidelines on sugar intake and evaluate the consistency of recommendations, methodological quality of guidelines, and the quality of evidence supporting each recommendation. It noted that several authoritative organizations have issued public health guidelines on consumption of dietary sugars. The organizations included the World Health Organization (WHO), the Scientific Advisory Committee on Nutrition (SACN), and the U.S. Department of Agriculture and U.S. Department of Health and Human Services. Their recommendations focused on limiting and reducing sugar consumption. The controversial conclusion was that Guidelines on dietary sugar do not meet criteria for trustworthy recommendations and are based on low-quality evidence. Public health officials (when promulgating these recommendations) and their public audience (when considering dietary behavior) should be aware of these limitations.  — The Scientific Basis of Guideline Recommendations on Sugar Intake: A Systematic Review.  Erickson J, et al., Ann Intern Med., Feb. 21, 2017

Product Launches Sweeter than Ever

Food Ingredients First web site presents monthly Key Trends, including an Analysis feature. In November 2016, the web site’s Analysis feature focused on the sweetener category – particularly five primary sweeteners tracked by Innova Market Insights, including acesulfame K, aspartame, stevia, sucralose and sorbitol. Results provided are measured from new global product launches introduced from 2014 to 2015. New product launches containing sweeteners increased by 13% overall during that period. The top category was sports nutrition, followed by cakes and pastries, then sweet goods and gums. The five sweeteners previously mentioned as tracked on an individual basis across all category launches revealed that sucralose increased in usage by 40%, acesulfame K by 21%, sorbitol by 6%, aspartame by 3% and stevia by 2%. Between 2014 and 2015, the top five health positions containing sweeteners that incurred significant growth were sports and recovery products, which increased by 284%, gluten free by 100%, allergen free by 89%, sugar free by 27% and low calorie by 8%. In addition to sports nutrition, bakery and confectionery, the five sweeteners tracked were added to soft drinks and snacks, as well as other products. — Innova Market Insights, Analysis Feature-Sweeteners, Posted online Nov. 2016

(Posted August 23, 2016) The UK government has finally unveiled its Childhood Obesity Plan. Following a one-year delay, much of the response to the long awaited plan has been critical. The British Medical Association said the government had ‘announced a weak plan rather than the robust strategy it promised’, while the British Dental Association said ‘it will take more than half measures to deal with the sugar crisis’. Chef Jamie Oliver, who has been an outspoken campaigner for a sugary drinks tax in the UK, expressed his disappointment: “I’m in shock,” he said. “The long awaited strategy is far from robust. It contains a few nice ideas, but so much is missing.” -— Food and Drink Technology

The FDA’s Nutrition Facts Panel and Added Sugar
(News item has been updated.)

The FDA has updated the information required on the Nutrition Facts panel. Originally manufacturers with over $10 million in sales must implement it by July 26, 2018.[The FDA has extended this deadline.] Smaller companies will have an extra year to comply. “Added sugars,” including n grams and as percent Daily Value, will be required to be listed on the panel. Added sugars include those from syrups and honey, and sugars from concentrated fruit or vegetable juices that are in excess of what would be expected from the same volume of 100 percent fruit or vegetable juice of the same.   – For more details, click here.
More comments: At the November 7, 2017 Sweetener Systems Conference, Bruce A. Silverglade, Principal, OFW Law, provided an update in a presentation “FDA’s Nutrition Facts Panel and the Labeling of Added Sugars.“

FDA Released “The Declaration of Added Sugars on Honey, Maple Syrup, and Certain Cranberry Products: Guidance for Industry Draft Guidance (Guidance is being distributed for comment purposes only)” on March 3, 2018.

The World Sweetener Market is growing at 4.78%, according to a new market research report from RnR Market Research. A key growth driver is the high incidence of obesity and diabetes. Obesity and diabetes are lifestyle disorders found in a large segment of
the world population.Childhood obesity and juvenile diabetes are on the rise, especially in developed economies like the US and the UK. In 2013, approximately 347 million individuals had diabetes worldwide.  – More details on Global Food Forums.com

An article, “Why Sugar Is Added to Food: Food Science 101” by K. Goldfein and Joanne Slavin, published in the September 2015 issue of Comprehensive Reviews in Food Science and Food Safety discusses the functions of sugar in food and shows that the methods used to replace added sugars in foods can result in no reduction in calorie content or improvement in nutrient density. One section looks at formulation changes when replacing added sugars. Since no sweetener duplicates all of sucrose’s functional properties, the paper states that “it is imperative to understand how the sugar is functioning in a particular food product before replacing it.” For example, without using bulking agents in bran cereal once sugar is removed, “it would have the consistency of sawdust.”    — For more information on the review and a link to access the full review, click here.

Why is There So Much Sugar in our Foods?

A 2012 Global Food Forums Blog discusses “Why is there so much sugar in our foods?” It notes that perhaps no ingredient category has been as maligned in recent years as ingredients making foods and beverages sweeter. Unlike the taste of saltiness, the preference for sweetness is innate in humans and many mammals (one exception is domestic felines which cannot perceive sweetness). Foods (both unprocessed and processed) are sweet because humans like sweet foods.

– January 2012 blog on sweetness in foods with several comments