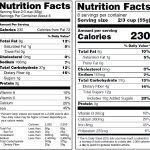 Provisions of the final rule Nutrition Facts rule can still be revisited through FDA guidance documents, use of enforcement discretion and/or issuance of interim final rule.

Why is there the need? The FDA’s pending regulations for “added sugar” labeling make no sense. The Nutrition Facts label of a snack bar, for example, will read, “Total Sugars 10g; Added Sugars 10g.” “You can say, ‘reduced sugar’ or ‘sugar free,’ ‘no added sugars,’ but not ‘low sugar.’ But the real stickler is ‘added sugars per serving,’” Silverglade said. The regulations, he maintained, are unworkable.

He listed five principle reasons: 1) the science to support sugar content rules is “tenuous at best;” 2) the pending labels are “confusing and misleading;” 3) the rules rest “on very shaky legal grounds;” 4) the technology currently does not exist to verify compliance; and 5) the regulations would put U.S. food and beverage manufacturers totally at odds with global standards.

First is the lack the scientific support: “A big part of problem is that sugar labeling regulation began as a political, rather than scientific project. So political science quickly overcame real science,” said Silverglade. “As a result, the FDA flipped and flopped and flipped again to develop rationales for the regulations.”

“Moreover, the FDA ultimately based its decision to require ‘added sugar’ labeling on the recommendation of the 2015 U.S. Dietary Guidelines Advisory Committee (DGAC), which was heavily politicized,” asserted Silverglade. Subsequently, the FDA failed to submit its conclusions to a customary review by the U.S. National Academy of Sciences (NAS). As it was, the foundational scientific evidence utilized by the DGAC to justify added sugar labeling was very limited and very weak. Presumably, Silverglade implied, the NAS would have noted this.

The second reason is label confusion: The FDA’s own research projected that 24% of consumers would be misled by the pending added-sugar labeling regulations, said Silverglade.

For example, an FDA study indicated that about 25% of consumers would choose a food higher in saturated fat and sodium merely because its “added sugar” label listing was lower than that for an alternative, higher “added sugar” product that contained healthier saturated fat and sodium levels. “This shows the danger of the FDA stressing a particular nutrient level to such a degree that consumers misunderstand the total nutrition label and take away the wrong message.”

Furthermore, under the pending regulations, continued Silverglade, a bag of sugar would have to declare 8g of sugar per serving on the Nutrition Facts panel and also 8g of “added sugars” per serving. “This is nonsensical!” said Silverglade.

The third reason involves legal concerns: The FDA is required to engage in “reasoned decision making.” If not, the FDA violates the Food, Drug and Cosmetic Act by engaging in “arbitrary and capricious” action. Silverglade maintained that the FDA did this in bypassing the NAS review process, thereby violating the U.S. Administrative Procedures Act. He also noted that, for the Federal Trade Commission (FTC) to make a case against misleading advertising, it need only show that 15% of consumers could be misled by a particular advertisement. But the FDA’s own research indicated that as many as 24% of consumers would be misled by the proposed added sugar claims. The FDA cannot, by law, mislead consumers.

A number of arguments exist as to why the pending requirement for “added sugar” labeling on the Nutrition Facts should be revisited.

There are also 1st Amendment issues (regarding free speech), continued Silverglade. “Under the doctrine of commercial free speech, companies have a right not to be forced to make misleading claims.”

Thus, it behooves U.S. food and beverage manufacturers to propitiously lobby for changes, while that narrow window of opportunity remains open.